Another of the techniques I mentioned in my composition overview is a simple composition technique which works quite well and that is to give the subject of the image space to look into.

If you are taking pictures of people or animals and they are not looking directly at the camera, give them the space to look into. If you have them looking straight out of the frame, meaning the space is behind them, generally this image won’t be a pleasing composition to most people.

For instance, this pigeon in the first image is looking out of the frame, all the space is behind the bird and the image doesn’t really work.

In the next image the pigeon is place to the right of the image and has space to look into making it a more pleasing image to most people. 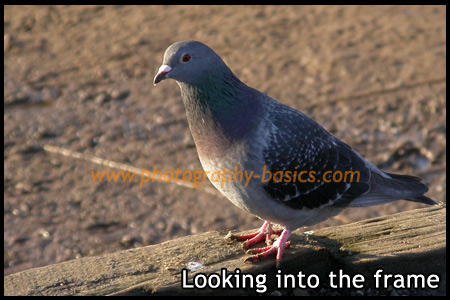 It’s not just for people and animals. Anything that has movement in a particular direction should have space in the image to move into, rather than be moving out of the image. Motor sports is a good example of this. Of course, this is just another composition guideline, and sometimes the image can work if you break the ‘rules’.

What is the Rule Of Thirds

5 thoughts on “Looking into the frame”