Earlier this month I paid a visit to the Photography Show at the NEC in Birmingham. For those that don’t know, this is an annual photo show where companies can exhibit their shiny shiny gadgets and gizmos and try and persuade photographers to part with their cash. There are also a series of guest speakers, demonstrations and workshops to attend too.

My reason for going wasn’t to buy more photography gear, I’ve been doing too much of that lately, it was to attend a session with Joe McNally to listen to him talk about his life as a photographer, to attend a workshop of lifestyle photography and to try and learn from the many demonstrations that were going on during the day.

Now when I said I wasn’t going to buy more photography gear, well I did buy one thing which I’ll talk about later.

So when you walk into the massive exhibition centre, you see crowds of photographers, lots of trade stands and quite a few people carrying big bags of things they have just bought. My tactic for these types of events is to do one big lap, see what is about but don’t get held up at any one place. Then you can work out what you want to go back and see and take your time.

My first stop was to the Fuji stand. I’ve become a bit of Fuji fan boy recently with a decision to sell all my Sony DSLR equipment and buy the smaller, mirrorless Fuji X-Pro1 with a couple of prime lenses and a zoom. The reasons behind that I’ll save for another post but needless to say, Fuji have got me motivated to go out and take pictures again. Something I was struggling with before.

On the Fuji stand it was the new X-T1 camera that I wanted to see. There has been a lot of press about this camera, and there haven’t been any bad reviews that I’ve seen so I wanted to get my hands on it and give it a go. I have to say, after all the hype, I was a bit underwhelmed, it’s not that different to the X-Pro1 to use really. OK, technically it’s a great camera and has some great features on it, especially the EVF (Electronic View Finder) but I didn’t feel like I had made the wrong decision buying the X-Pro1 and soon moved on to another stand.

One of the things I noticed at this event was the number of stands selling wedding albums and framing services. As I didn’t really have any interest in those services it meant I could avoid certain areas of the show altogether. Fine by me.

There were a few stands I stopped at to have a chat with the people there. Smugmug was one of them. This a web site service that effectively gives you a portfolio site out of the box, and a very good one at that, with various pricing plans and options you can bolt on. It’s a great service if you want to sell your images as they have an integrated shopping cart too which makes these things a lot simpler to set up. Being someone who builds websites for a living, I was interested to talk about some of the geekier aspects to the sites they offer. I think if I had wanted to do more in the way of selling and if I didn’t already have a portfolio site with 500px, I may have been tempted to sign up. Check them out anyway. 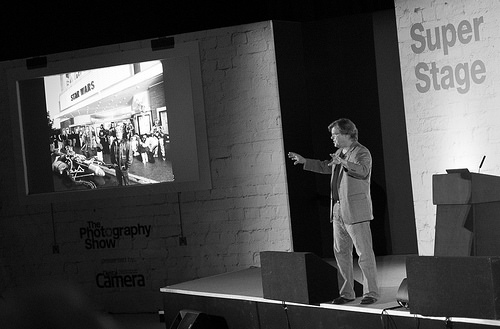 So, after a bit more wandering around, it was time for the main reason I had gone. Joe McNally was going to present on the main stage and I had reserved a ticket to see him. The stage set up was great and I think everyone had a clear view. Joe is just one of those really nice photographers who isn’t up themselves, despite having covers for Time Magazine and National Geographic, he is more than happy to stop and chat and his presentation was excellent with lots of insights into what it was to be a press photographer all the way through to him taking pictures standing at the top of Empire State Building, on the outside! So that was enjoyable and worth the visit.

After that I decided it was time to see if I could pick up a bargain. I’d seen the Lee Filters Sev5n system being talked about as ideal for Fuji cameras so I thought I’d find out what sort of deal I could get at the show. I made a decent saving after comparing a few stands and checking for prices online and splashed out the cash with a company called Speed Graphic where I purchased the filter holder system and the Big Stopper ND filter as I wanted to be able to do some long exposures for a series of images I have in mind. More on that in another post.

So, I’d spent as much cash as I could bear so decided on another wander around before heading home and ended up watching a demonstration by Frank Doorhof on using some new studio lights by Elinchrom on behalf of The Flash Centre. I will admit that this was the first time I’ve seen Frank do a demo but it was fun to watch. He’s a big chap but also a funny chap and had the crowd laughing which is always good to see at a demo. He showed some interesting techniques and made it all look very easy. I guess that’s why he was doing the demo and not me!

So it was time to head home. Oh yeah, the workshop on Lifestyle Photography. Well, I’m sorry to say that I didn’t get much out of it and wasn’t that impressed with it which is why I didn’t talk about it much. Nevermind, it didn’t ruin my day.

So if you around Birmingham next year, it’s well worth getting some tickets and going along. I’m pretty sure you’ll get something out of it, even if it’s just a few bargains at the many trade stands.

What to expect on a Photo Walk